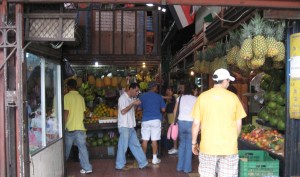 Heredia was much like San Jose. Exteriors were dirty concrete and rusted metal, with the junctures between the two often neglected. To say there was no insulation would be an understatement – a Missouri rainstorm would whip in through every crack.

We were assigned a scavenger hunt in the Mercado. They divided us into groups to look for items from a list, which we were forbidden to show anyone – we were meant to ask people where we could buy things and how they were used. All of our things (with one exception) turned out to be herbs and spices, so we found ourselves bothering the same people again and again.

A group of exhausted high schoolers need some sort of authority figure to maintain organization, so when it came time to eat lunch, in particular, there were arguments. For about half an hour we bickered over where to eat, as half the group wanted cheap, authentic food – the kind most prevalent in the Mercado itself, while the other half couldn’t be persuaded to go anywhere near the street vendors.

The group finally split and I stayed with the Mercado group. The little bar we ate at probably left us more exposed to thieves and pickpockets than any other place we went on our trip, but I wasn’t at all worried about the food. They prepared it right in front of us, and meat and cheese and cilantro smells wafted over the dirty glass that separated the kitchen from the counter. My first full and real Costa Rican meal – Pollo con Gallo Pinto – was delicious. I even ordered a cheese tortilla to finish it off.

An Expat in Oslo

bit-by-bit learning the "norsk way of life", exploring Norway and sharing my experiences with fellow expats and Norwegians.

Adventures in the Land of Maybe

An American girl’s island-hopping, tallow-tasting, party-crawling, tongue-twisting and sheep-stalking attempts to understand what it means to be Faroese.

South of the Strait

American Girl In An English World

Two suitcases, a passport, and a one-way plane ticket to the United Kingdom.

A Place in Prague

Today is the Day!

Write and pronounce words from Taiwan

Not just another WordPress.com site

Babylon helps you understand your world

An American Hermit Crab in Denmark

Spanish as it hits my ears